Yes, I am still working on the burgers (see? a bacon triple!), but I need to rant about the Economic Stimulus Package they’re trying to move forward in Congress. 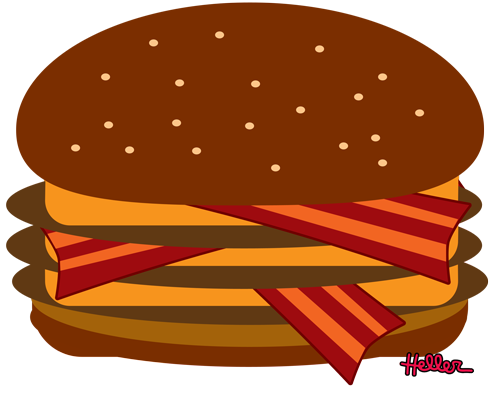 Dear, Mr. President (and all you senators and representatives),

The American People are getting tired of this B.S. The Republicans are crying “tax cuts” and “no more spending”. Why? Because you’re letting them get away with it! You have a huge laundry list of programs (600+ pages?!) in this stimulus bill, but have yet to explain to each other (or to us) the simplest of things that we all want to know:
HOW MANY JOBS will each of these programs create? I’m not looking for an exact number, but COME ON!!! GIVE US A GUESS! SOMETHING! ANYTHING! If you’re not even going to try to justify these programs for the immediate stimulus that we need, then maybe some of those programs should wait until the next bill. Either way, move this thing forward!

FIX THE BANKS! I don’t know exactly how, but a lot of smart people out there do. Find them and figure it out! All I know is … billions of bailout dollars later, I still can’t refi my condo and all the credit card companies are buying corporate jets and sponsoring Superbowls all while raising their rates to gouge us all until the new laws kick in in July (not soon enough – make ’em comply NOW). Put a cap on balance transfer fees. They mysteriously removed them, making it even more difficult for those trying to pay down their debt.

ELIMINATE or standardize ATM fees. It’s out of control! Everyone knows that self-service kiosks SAVE money for Banks. Let’s stop pretending that they’re not benefitting from this.

Get the banks lending again!
Require ALL banks getting TARP funds to offer refinance for ALL UNSECURED DEBT at 1 to 3% over prime,
and provide a mechanism for people to refi ALL MORTGAGES at 30yr fixed rate for 1 to 3% over LIBOR.

Let the Big 3 automakers die if they refuse to actively upgrade their production to electric, hybrid, etc.
We should all be getting 60+ MPG by now for gas powered hybrids.

Make the Republicans happy. Throw in a MEANINGFUL tax cut:
Take the other half of the TARP funds and give it to the people. That would give about $2000 to $2500 (if I did my math right) to every person in the workforce (and the unemployed) earning less than $75K per year. Most of them will use that money to keep their debts from getting out of control. Trickle UP economics.

I’ve got more ideas, but I think that should be good enough to get the economy rolling.

HURRY UP! We’re all getting poorer!