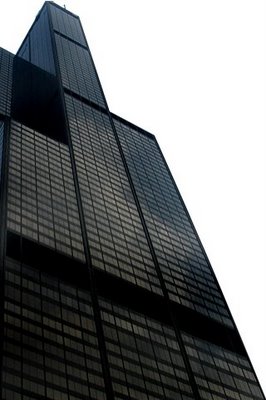 You may or may have not heard about the Sears Tower possibly being painted silver (dumb).
You might not have heard that the current owners of the Sears Tower in Chicago have reached an agreement with the Willis Group, who is consolidating its offices and moving 500 employees into the tower.

They are changing the name of the Sears Tower to the WILLIS TOWER!

As I’m sure every news outlet will do, let me be one of many to scream…
WHATCHYOOTALKINBOUT, WILLIS?

Does Landmark Status mean NOTHING in Chicago?
OK, forget about landmark status… have businesses learned nothing of Chicago and their brand loyalty and tradition?
Ask Macy’s . They’re still struggling with the takeover (and dismantling) of Marshall Field’s.

If you want to call it: Willis Group Sears Tower or Willis/Sears Tower, I can see an argument for that, but don’t expect people to start calling it Willis Tower….. JUST BECAUSE YOU BOUGHT THE NAMING RIGHTS!

The Sears Tower, completed in 1973, was commisioned by Sears, Roebuck and Company and for many years was the tallest building in the world. It remains one of the most well known structural icons of Chicago. You can’t erase that legacy overnight just by buying naming rights and updating a wikipedia entry. The building has gone through several owners over the years, even after Sears had vacated the building , yet the Sears name has remained… until now.

Why? Excellent question. There’s a few possible reasons. For one, Sears’ naming rights for the building expired in 2003, and they probably can’t afford to support funding for naming rights if given the option to renew them. The lousy economy is probably the other reason. Building owners had received offers for naming rights over the last few years from several other tenants in the building, including CDW and Ernst & Young, and have rejected the offers. Its possible that the building owners need to increase their cashflow. It’s pretty clear that the Sears building owners and The Willis Group suffer from greed (or poverty) for the former and misguided vanity from the latter.
It’s highly doubtful that the city will adjust to the new name any time soon. I don’t think I’ll ever be visting the Willis Tower anyway.
In the meantime, I think I’ll go visit the Sears Tower Skydeck. I haven’t been there in a while.