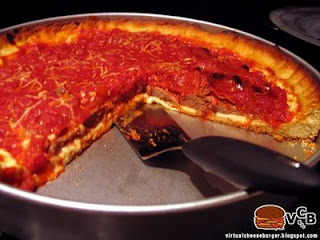 Good day, and welcome to Rant #3 – THE CRUST:
Deep Dish Dough and the Pequod’s Confusion:

To start, I should explain the main difference between a Basic (or New York style) pizza dough and a Chicago Style Deep dish dough.

Basic Pizza Dough contains flour, oil, yeast, and water, and most people also add salt.
Lombardi’s in New York (the widely accepted originator of New York style pizza and the first pizzeria in the US) has mentioned on television that they don’t use oil – only flour, yeast, water, and salt.
The ingredients are mixed together and kneaded for several minutes.
Kneading dough builds up gluten, which provides a chewy/bready texture to pizza dough.

Deep Dish Pizza Dough is also made with the same ingredients, but the amounts of oil and water are typically reversed, having more oil in a deep dish dough.
A deep dish crust is closer to a biscuit or pie crust, so unlike a Basic dough, deep dish dough is not kneaded much at all. Ingredients are mixed to combine and kneaded long enough to bring the dough into a ball (about a minute).

Both types of dough are given time to rise, and various recipes also require time in refrigeration to develop additional flavor.

Many people are under the assumption that Chicago deep dish crust is thick.
If made correctly, this is really not true.
The “deep” part of deep dish has more to do with the pan that the pizza is baked in and the generous amount of toppings that are typically added to a deep dish pie.

(below is a video about making deep dish pizza)

If you can’t see the embedded video, you can click this link to view it.

Perhaps some of the confusion lies in the variation of a number of pizza restaurants that interchangeably call their “pan” pizzas “deep dish”. I’ll admit that they may be using the exact same pizza pan to make their pan pizza, but often what they are making is not traditional Chicago Deep Dish. 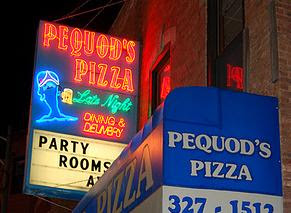 Originating in Morton Grove, Pequod’s was originally started by a guy named Burt back in 1971, (which he opened after selling his Rogers Park restaurant, Gulliver’s). Burt sold Pequod’s in the 1980’s (which had then opened a second location in Chicago) and later opened up his own low key pizza place (Burt’s) across the street some time later. This style of pizza, although extremely awesome, does not qualify as traditional Chicago Style Deep Dish. It is, however, very close. I call this style “Modern Deep Dish” to distinguish it from “Traditional Deep Dish”. The Modern Deep Dish pie is assembled in relatively the same way – crust on bottom, then the cheese, then the sauce. Other topping locations vary.
The main distinction between the two styles is the dough.
Pequod’s has a thicker, pillowy raised crust, resembling something closer to a square Detroit or Sicilian style crust, but baked in a round deep dish pan.
This dough has been kneaded longer than a traditional deep dish dough.
Also unique to this style of pizza (and probably it’s trademark) is the caramelized cheese on the outer crust, which is created by adding cheese all the way to the edges of the pizza pan, overlaying the crust which is then charred to perfection. This characteristic will either make you love or hate this pizza, depending on your tastebuds. I’m told, but have yet to experience, that the pizza from Burt’s Place is superior to that of Pequod’s. Burt is much more in control of the quality of his pies, as he is the one baking them.

BACK TO THE DEEP DISH DOUGH:

So way up there above the Pequod’s story, I was talking about how deep dish dough is not actually a thick dough. Hopefully you watched the embedded video of Marc Malnati building a deep dish pizza, as he would have given you the lowdown on that and the basic concept of deep dish pizza. The dough is not tossed, it is pressed out into a deep pan in a thin layer and then pulled up the sides. Then sliced cheese is added, then sausage (if you’re having sausage), then the sauce goes on top. The sauce is on top to keep the cheese and other ingredients from burning because of the longer baking time of a deep dish pie. The one thing he left out that I had touched upon in the last pizza rant is that none of the traditional chicago deep dish chains – not even Gino’s East – NONE of them use cornmeal in their dough. A commonly recurring myth, cornmeal finds its way into a number of so-called “chicago style deep dish” recipes in books and on the web. If you’re attempting to make your own deep dish at home, do yourself a favor – don’t believe them when they tell you deep dish dough contains cornmeal. It’s just not true. (yes, I will shut up about the cornmeal now) The answer you seek is corn oil. How do I know? Well, there’s a bucketload of knowledge to be had by visiting the pizzamaking.com forum, where you will find a wealth of information gained by pizza-philes who have been seeking the answers to the secrets of pizza-making for years. They have found their answers by trial and error, communicating with each other about their experiences, and by talking to the people behind the scenes at your favorite pizza place. I discovered them on my own google-based quest for deep dish pizza and have found them to be extremely helpful.

There’s not much else to say about the dough, so if you’re thinking of ma
king your own deep dish pizza, and you’re willing to do a little digging, find a decent recipe for deep dish and give it a try!

A BRIEF NOTE ABOUT TOPPINGS:
As mentioned above, tomato sauce is placed on top to keep the toppings from burning.
Some toppings can benefit from a bit of charring, but you may need to practice to find out which ones can handle being on top during a 30-40 minute bake. Pepperoni should be partly submerged or pressed into the sauce to give the pepperoni the opportunity to get a bit crispy without getting over-charred. If you like your pepperoni on the softer side, add them on top of the cheese before you add the sauce. Mushrooms and onions contain a lot of water, so they could probably survive on top of the sauce. Peppers should probably be placed in or under the sauce (or added halfway through the baking time). Garlic and spices should be added before you add the sauce, or should be combined with the sauce before adding it to the pie.

I’ll keep posting pics of new pizzas as I make them.
—