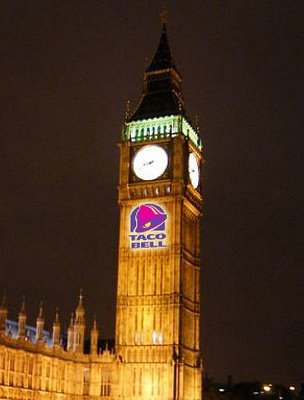 London, England – Yum Brands has announced that they have relocated their international office to London. Having leased 1600 square feet and relocated 20 employees, they have been granted rights to rename the clock tower formerly known as “Big Ben”. It will now be known as the “Taco Bell Clock Tower”. David C. Novak, CEO of Yum Brands understands that some Brits may never get over the change, but has no problem if people want to call it “The Big Burrito” or the “Guac Clock”. “We certainly appreciate and understand the sentimental attraction to the Big Ben name, and it’s certainly a London icon,” said Novak. “Our move into London is a good thing for the city. We’re bringing tens of jobs into the city.”
Yum took the lead from Willis Group Holdings, who yesterday leased a portion of the former Sears Tower in Chicago, and then committed fiscal suicide by renaming the world reknown landmark skyscraper “The Willis Tower”, shortly before flying to Washington, D.C. and depositing a suspicious flaming paper bag on the doorstep of the White House. No suspects have been found in the suspicious delivery to British Parliament of a gift box containing a “used” cat litter box .