It is rare that I ever make such effort to curse in a rant, as I usually try to be much more eloquent. I make a rare exception for the Department of Motor Vehicles, which has yet again shown another example of how city officials in Chicago hate the people they govern.*

*Before I begin, I would like to mention that I am aiming this rant at my recent situation and at management and not at any city employees, who as far as I can tell, while some may have a reputation of being surly or unhelpful, are only able (or willing) to do what they are allowed to do.

Dear c***s*****ng m***erf***ers at the DMV:
Thank you so f***ing much for printing on your license renewal form that Wednesday hours are extended until 7pm. 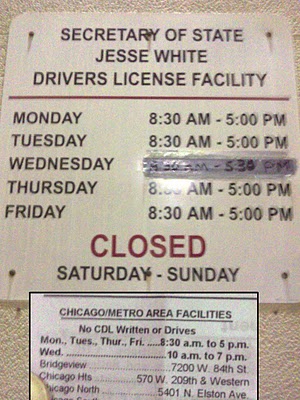 At top, the sign outside the Chicago North location at 5401 N. Elston;
at bottom, the back side of my license renewal form,
clearly showing Wednesday hours until 7pm

Thank you so very much also for using duct tape and a marker to update the sign outside of your building, proving that you truly are c***s*****ng m***erf***ers.

If you are going to create your so-called “winter” hours,
FRIGGIN’ UPDATE your damn license renewal forms!

Regardless of this, what you have done is WRONG WRONG WRONG!
Just because it’s Winter, doesn’t mean there are less people needing to renew their driver’s license outside of regular business hours.
People have birthdays year-round. WE HAVE JOBS TOO!

I know the economy is tough and perhaps this means that you need to cut hours where you can,
but that doesn’t make it any less necessary for you to consider changing your times of operation.

How about on one or two days a week, you open the office a few hours later than normal and keep the office open an additional few hours so people with 9-5 jobs and/or long commutes can still take care of renewing a driver’s license or taking care of some other DMV thing.

And WOULD IT KILL YA TO BE OPEN PAST NOON ON A SATURDAY?

In closing…
F*** YOU, DMV. BURN IN HELL, YOU SUCK,
THERE ARE TOO MANY STATES NOWADAYS! NO, I AM NOT A CRACKPOT!
SCREW FLANDERS.
(okay, those last few are from The Simpsons, but I think you get my point).

P.S. – You owe me a few bucks for the gas I wasted driving to your closed office. Aw, heck! I’ll let you off this time, but don’t let it happen again!