Skip to the content
Anyone see the photos of ‘Desaturated Santa’ from Santa-Con?
Well, after checking to see if this was just some cheap ‘shopped hoax,
we confirmed that YES, this girl actually tries to look monochromatic in real life,
even though some of those photos look suspiciously altered.

Either that, or we’re all colorized and she was drinking red koolaid that day.

In the spirit of having ten minutes to kill on a Sunday night,
I summoned the ghost of Ted Turner (wait, he’s still alive, isn’t he?),
um… then let’s go with.. um… Leslie Nielsen!
Yes, he would have gotten a kick out of this silliness…
let’s go with him…
ahem..
So I summoned the ghost of Leslie Nielsen who suggested
that Ted Turner would want me to ‘colorize’ this girl.
So here’s what Desaturated Santa Girl would look like

if I colorized her like Ted Turner colorizes old black and white movies. 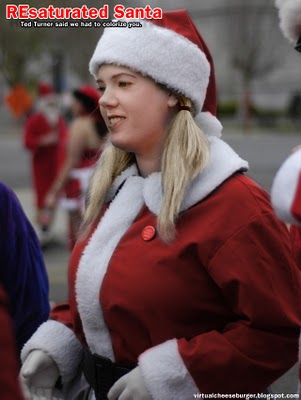 3 replies on “10 Minutes in Photo-mo-shop and VOILA! RE-saturated Santa Girl!”

Missed a bunch of spots, but I appreciate the effort- funny! Reddit had fun with this earlier in the day, too (desaturating everyone else and coloring me in, etc).

The photos aren't altered in any way except to add a watermark- straight from the camera. (Feel free to search Flickr for independent confirmation- "desaturated santa" will pull up some results from people-who-aren't-me).

I'm really curious, though, that you're not crediting the photographer whose photo you took, altered and then watermarked as your own. That photo was licensed under a creative commons-with-attribution.

Yeah, like I said, I only took ten minutes out to do it and wanted to hint at what a lousy job Turner did colorizing those movies. 🙂

I forgot that the image I doctored came from a different set than the one I linked to above.
I'm all for giving credit where credit is due, so I've updated this post with credit to Tom Hilton, who shot the 'original'.

Very funny. And thanks for giving credit–I appreciate it!