I am making a deep dish pizza when halfway through the baking, smoke starts coming out of the oven and the smoke alarm goes off. This is not an uncommon occurrence when I bake things in my oven because I don’t have external exhaust for my gas range and placement of the smoke alarm in my condo is not far enough away from the kitchen to avoid a ‘false alarm’. Except this time, the smoke is starting to burn my eyes, so I turn off the oven (a pizza is still baking in there), open all the windows (thank goodness the weather was unseasonably warm) and put a window fan on full blast at the nearest window to the oven, blowing outward (and every other fan I have working to move the air in that direction). The residual heat from the oven finishes the pizza nicely, which I partake of a slice, and then wrap the rest up for later reheating in my toaster oven (now my only oven). While wearing a wet cloth over my face to filter the grease-filled air, I steal some sips of beer under the cloth and I wait for my home to ventilate while flipping back and forth between the Doctor Who marathon and the sub-par local and national New Year’s coverage, waiting for the count down to 2011 with Seacrest and Dick Clark’s head.

Days later, after having purchased a number of cleaning supplies and room deodorizers, my condo is almost back to normal, but the damage has been done. I assess the damage. Gas burners still work, but the oven is dead, and my tax refund is months away. Out of necessity, I teach myself how to make deep dish in a toaster oven. It dulls the pain. Then, finally in March (after early filing), my tax refund comes in. I schedule my installation, and on April 2nd, I have a new oven. 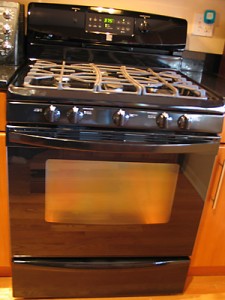 So what happened?
Days before baking, I had been experimenting with deep frying things (like bacon, chicken, and french fries) in an enameled cast iron pot on my stovetop. I discovered the hard way, just how inaccurate my deep fry thermometers are (digital thermometers have been added to my amazon wish list). I also learned that it’s very easy to overflow a deep fryer when you put too much into the fryer at once, add wet or starchy items to really hot oil, or use too much oil in the first place.

When the manufacturers say that your gas range has ‘sealed burners’, this is not 100% accurate.
The truth is there is still a little hole in the middle of each burner, and any amount of oil that overflows into the surrounding burner well, will most certainly leak down into that hole, and into the surprisingly unprotected insulation pad that surrounds your oven. The insulation pad keeps the majority of the heat inside your oven so it is more efficient and heats up your food instead of your home. That insulation pad, I learned, is a $70 part, that would cost about $300+ in labor to replace, if repair shops even wanted to do that repair for you, which they don’t.
The main problem is that you have to take the entire oven apart to get the pad off, and even if you were able to clean and replace the insulation pad, your oven would never be the same. Bottom line – If you’re going to spend upwards of $400 to repair an oven, you might as well buy a new one.

Word of advice:
Be extra careful when deep frying on your stovetop. Test your thermometers for accuracy with a pot of boiling water. Your thermometer should more or less read 212F. If it doesn’t, you may need to get a new one.

If you see the oil heading for a boil-over, KILL THE HEAT IMMEDIATELY or you can potentially have a grease fire on your hands when the oil overflows onto a live flame.

If you can get one of those electric counter top deep-fryers with the built-in thermometer and heating controls, you are probably going to be a lot safer in the long run.

You can get more tips on safe deep frying here: http://www.wikihow.com/Deep-Fry-at-Home

Here’s some photos of the very first deep dish pizza from my new oven! 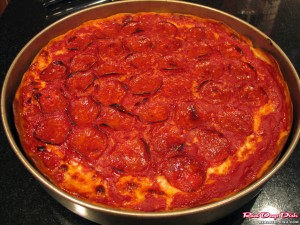 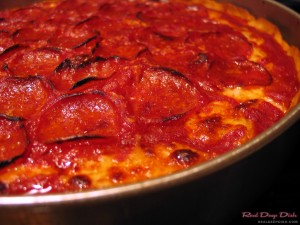 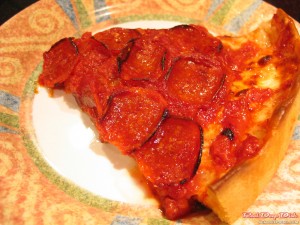 and some bonus photos of my 2nd Chicago Style THIN CRUST pizza trials, which I baked last night –
now with SQUARE CUTS! 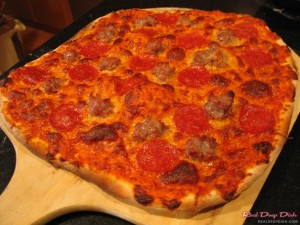 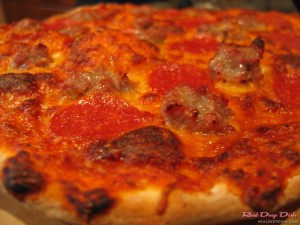 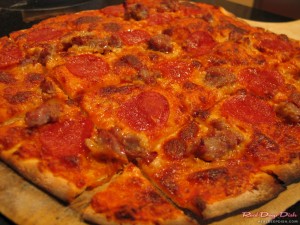 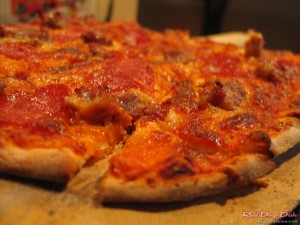 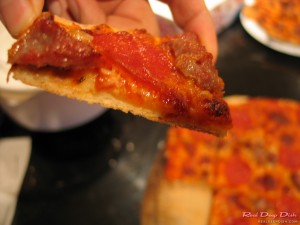 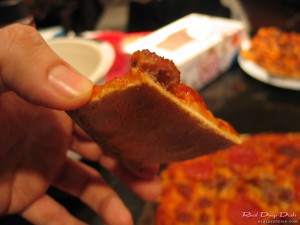