Last weekend, I fired up the ‘ol offset smoker and made some the best St. Louis cut smoked spare ribs ever!
A first-attempt at a beef brisket and several sausages were also along for the 6+ hour smoky ride.

As often happens when I’m cooking and serving, I’m not always mindful to shoot photos of the stuff we’re going to eat before we all dig in. Also, my camera is getting kinda old and wonky, but I’m occasionally able to coax a few good shots out to post up on the CheeseBLOGGER.

The ribs, more or less, looked like they did the last few times I made them.

Sausages look like.. well, they look like sausages (borrrrrrrring to shoot photos of, but tasty as hell!).

…and the brisket?
Well, you would have loved to see how deep the smoke ring was on that brisket. You really would have been in awe of that inch deep pink smoke ring around the outside of those tasty smoked beef slices, cut precisely against the bias and stacked and spread out like the most amazing (cow-flavored) deck of cards on the serving platter,
but sadly the camera was not conveniently available.
I will be sure to take extensive photos of the next brisket I smoke.

The last bits of the brisket got chopped up and put on a sandwich, which just happened to have some really good natural lighting, and had visible steam coming off of it from that light, so I was motivated to shoot a few shots and hope for the best.

So, here’s a couple shots of
CHOPPED SMOKED BEEF BRISKET SANDWICH
served on a hoagie roll with melted sliced mozzarella. 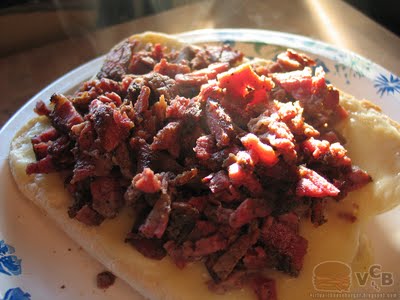 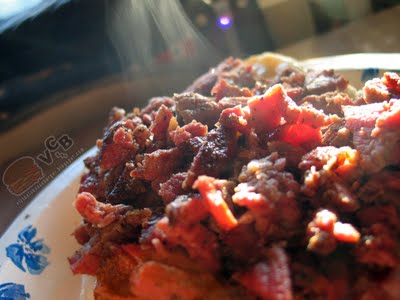 Greetings. This is my first time on your blog, but you have a terrific one. I am always on the look out for new blogs, new ideas. I especially appreciate all the details you do, so many photos makes it seem like anyone can replicate the recipe!

It is a tool for bloggers to see and to be seen. Your posts would fit in perfectly.

in addition, all photos, recipe titles as well as your blog name would link directly back to your blog. Thus giving you new attention and potentially new readers.

Or, if you just want to take a look at a lot of fellow food bloggers all in one place. A great learning experience to get ideas about how to establish your own blogging voice!

Please take a look. If you have any ideas or questions, please do not hesitate to write

Leave a Reply to Inspired by eRecipeCards Cancel reply